Karen Goldberg elected to the National Academy of Sciences 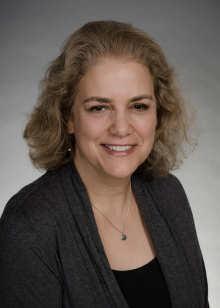 Karen Goldberg, an affiliate professor of chemistry at the University of Washington, has been elected to the National Academy of Sciences. Goldberg is one of 84 new members to join, each chosen for “distinguished and continuing achievements in original research,” according to a statement released by the Academy. Their addition brings the total number of active members of the National Academy of Sciences to 2,382.

Goldberg studies catalysts, which are materials that act to increase the rate of chemical reactions. Catalysts are essential for industrial production methods ranging from pharmaceuticals to construction materials. In addition, catalysis methods enable essential laboratory experiments and scientific breakthroughs in chemistry, physics, biology and medical research.

Goldberg’s current research is focused on creating new catalytic methods to synthesize fuels and other chemicals more efficiently. Her approach is to elucidate the mechanisms of reactions that are mediated by organometallic compounds. This new knowledge aids in both understanding current catalytic methods and identifying routes to develop new and innovative catalytic protocols. This work could potentially lead to more sustainable sources of energy as well as other valuable organic chemicals for industrial applications.

Goldberg was a full-time UW faculty member in the Department of Chemistry from 1995 to 2017 and was the Nicole A. Boand Professor of Chemistry at the University of Washington. She moved to the University of Pennsylvania to become a Vagelos Professor of Energy Research and the inaugural Director of the Vagelos Institute for Energy Science and Technology. From 2007 to 2017, she served as director of the National Science Foundation-funded Center for Enabling New Technologies through Catalysis, a consortium of 20 faculty members and research labs at more than a dozen universities and research institutions pursuing innovative approaches to catalysis. Goldberg is a member of the American Academy of Arts & Sciences, a Fellow of the American Association for the Advancement of Science and the Washington State Academy of Sciences. In 2016, she received the American Chemical Society Award in Organometallic Chemistry.