Electrons in atoms are pretty talented. They can form chemical bonds, get kicked out of the atom and even “jump” to different locations based on their energetic states.

In 1961, atomic physicist Ugo Fano theorized that electrons harbor another and unexpected talent: They can interfere with themselves as they simultaneously take two different quantum-mechanical paths. On one path, they jump within the atom between discrete energy states. On the other path, they jump off the atom into the continuum of free space. Fano developed his theory after studying the electronic spectrum of helium gas excited by an electron beam. According to Fano’s theory, the electrons in the helium atoms were moving through two types of energy transitions, one discrete and the other continuous, which resulted in destructive interference through their synchronized mixing.

Though it has been almost 60 years since Fano published his theoretical explanation — now known as Fano interference — scientists have struggled to observe this effect at the nanoscale using an electron microscope. A team led by scientists from the University of Washington and the University of Notre Dame used recent advances in electron microscopy to observe Fano interferences directly in a pair of metallic nanoparticles, according to a paper published Oct. 21 in Physical Review Letters and highlighted by the journal’s editors.

“Fano described a complicated — and even counterintuitive — type of energy transfer that can occur in these systems,” said co-corresponding author David Masiello, a UW professor of chemistry. “It’s like having two children on neighboring swings that are weakly coupled to each other: You push one child, but that swing isn’t the one that moves. Instead, the other child’s swing moves due to this interference. It’s a one-way energy transfer.”

Masiello, a theoretician, teamed up with co-corresponding author and experimentalist Jon Camden, a professor of chemistry and biochemistry at the University of Notre Dame, to work on Fano interferences in electron microscopy. In a 2013 publication in ACS Nano, the two of them, along with members of Masiello’s group at the UW, theorized that they could trigger Fano interferences in certain types of plasmonic nanostuctures. These are experimentally testable systems — usually consisting of silver or gold or similar coinage metals — in which electrons can become easily mobilized and “excited” in response to light or an electron beam.

Masiello and Camden believed it would be possible to design and construct a system that would exhibit Fano interferences using nanoscale plasmonic components. But, creating this effect would require an extremely precise electron beam, in which the electrons all have approximately the same kinetic energy. The researchers teamed up with Juan Carlos Idrobo, a scientist at Oak Ridge National Laboratory. Oak Ridge hosts an advanced electron microscopy facility, including the monochromated aberration-corrected scanning transmission electron microscope that the team would need.

“This is the Lamborghini of electron microscopes, and it represents a very recent and sophisticated advancement in electron microscopy,” said Masiello. “This experiment would not have been possible even several years ago.” 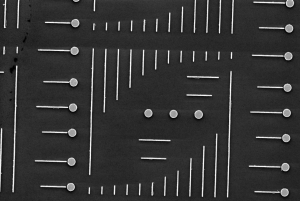 The individual nanodisks and nanorods of the golden ‘lollipops’ that the team designed and fabricated. Philip Rack

But designing and manufacturing the right plasmonic system was also a challenge for the team.

“The question of, ‘Could we see this Fano interference in electron microscopy?’ was much more complicated than we expected,” said Camden. “Early on we realized the ideas our team came up with weren’t working. But eventually, through trial and error, we got it right.”

Masiello’s team works on both the theory of plasmons and the theory of electron microscopy. They used analytical models of the behavior of plasmonic systems to design the physical layout, as well as interpret the spectrum, of an all-plasmonic system. This system would encode the interference effect that the team sought on the microscope’s scattered electrons. First author and UW physics doctoral student Kevin Smith determined that a “golden lollipop” was optimal. The system he designed consists of a thin, gold disc — just 650 nanometers in diameter — sitting next to, but not touching, a gold nanorod just 5,000 nanometers long. For reference, about 20 of those nanorods — lined up end-to-end — would equal the thickness of a piece of paper.

According to Smith’s theoretical design and mathematical analysis, an electron beam directed just outside of the golden disc of the lollipop would trigger the telltale signs of a Fano interference: Electrons within the faraway rod would begin to oscillate, driven only through the disc.

“That is precisely what we observed when our collaborators at Oak Ridge tested the system,” said Smith.

The team’s success not only demonstrates that it is possible to excite Fano interferences directly in a plasmonic system using an electron beam. It also provides new theoretical frameworks and models for working with sophisticated electron microscopes, like the facilities present at Oak Ridge National Laboratory.

“There is an exciting level of precision that is possible with these types of electron microscopes,” said Masiello. “It opens the door to more experiments like this — combining atom-scale spatial resolution with high spectral resolution from the visible spectrum out to the far infrared.”