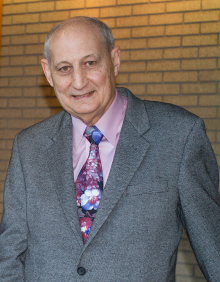 Building upon a long legacy of supporting scientific innovation and education, professor emeritus Larry Dalton and his wife, Nicole Boand, have committed $12 million to the UW Department of Chemistry. The majority of the gift will go to establish the Dalton Postdoctoral Fellowship in Chemistry — a postdoctoral fellowship similar to those at the nation’s most prestigious research institutions like Berkeley and Harvard.

One of only a handful of similarly funded fellowships at public universities across the United States, this fellowship will support researchers in the postdoctoral phase of their training. This is a formative and productive time for early-career scientists as they work to obtain research experience and publications to qualify them for full-time, tenure-track faculty positions. These promising scientists often play a critical role in accelerating fundamental research into real-world applications, as they are able to focus 100 percent on the research challenges before them.

“This postdoctoral fellowship will enable the Department of Chemistry to attract and support the brightest early-career scientists from across the nation, ensuring that the UW is a leader in next-generation research in the chemical sciences,” said Michael Heinekey, professor and chair of the Department of Chemistry. “This gift will help to elevate our department to the level of top chemistry departments around the world.”

Building on past gifts to the department, this gift will also fund two endowed chairs to help the department recruit and retain top researchers. One chair will be named for Boand’s parents and the other named for Alvin Kwiram, UW professor emeritus of chemistry and vice provost emeritus for research. Additionally, the gift will create an endowed departmental support fund to ensure the department has flexible and reliable resources to respond to opportunities as they arise.

Dalton and Boand’s most recent investment in the Department of Chemistry serves to underscore and amplify their legacy of impact at the UW. Over the years, they have established two endowed professorships in chemistry and two endowed chairs. These endowments have provided meaningful research support to the six faculty members who have held them, and to the numerous undergraduate and graduate students working alongside those faculty.

“Larry Dalton has already made a phenomenal impact at the University of Washington, and to have a faculty member add to such a legacy by demonstrating this level of dedication to his field and to future generations of students and professors in the UW’s chemistry department is truly remarkable,” UW President Ana Mari Cauce said. “I am profoundly thankful for this commitment from Larry and Nicole, which will honor his work and support innovation at the UW for years to come.”

This gift follows Dalton’s decades of research in photonics and nonlinear optics. He joined the UW Department of Chemistry in 1998. In 2000, Dalton and his collaborators published a foundational paper in Science, which laid the groundwork for innovations in opto-electronics, with major implications for telecommunications, sensor technology and information technology. Dalton went on to found Lumera Corp. — now part of GigPeak — to develop and manufacture opto-electronic devices. His research was instrumental in securing a major grant from the National Science Foundation to launch the Center for Materials and Devices for Information Technology Research at the UW, which was foundational for what would become the UW Clean Energy Institute.

During his nearly 20 years in the Department of Chemistry, Dalton invested his time, energy and resources to support students and burgeoning researchers. Both he and Boand have shown through their philanthropy a deep commitment to the next generation of science and scientists. The Dalton Postdoctoral Fellowship in Chemistry, along with the newly endowed chairs and other departmental support, is a culminating expression of that commitment.

“We make this current contribution in the hope and belief that it will promote recruitment and retention of the best and brightest researchers and educators in STEM fields to the University of Washington,” said Dalton. “Nicole and I appreciate the critical impact that STEM research has made and is making to the economy and well-being of Washington and the nation, and to the importance of quality education which assures continuation of this broader impact of STEM research.”