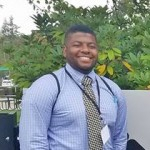 Congratulations to Jude Tunyi who has been chosen as a 2017 Commencement Gonfaloniere.

Each year the various schools and colleges select students to lead all the degree candidates during the Commencement procession. These students are called gonfalonieres because they carry the school’s gonfalon, a banner that hangs down from a crosspiece and bears that school’s name and symbol.

The gonfaloniere was a prestigious post in Italian medieval and Renaissance communities. Our gonfalonieres have a record of outstanding achievement at the university.

Jude Tunyi is receiving a Bachelor of Science in Biochemistry. His family immigrated to the U.S. from Cameroon, Africa when he was 10. He came to the University of Washington to gain the best education so that he can go back and improve the health care conditions of his home country. This led him to get involved in research, science and medicine at UW, which led him to his current major, at the intersection of all three areas. One of his highlights while at UW was doing computational research using molecular simulations which allowed him to travel to different conferences in various cities to present his research and engage with professional scientists. His research allowed him to be the recipient of prestigious awards including the Mary Gates Research Scholarship, the Levinson Emerging Scholar, a McNair Scholar, and Department of Chemistry and Biology Awards. Upon graduation, Jude will perform research at National Institutes of Health as part of a post-bac program before heading to medical school to obtain an MD/PhD in Neuroscience. In the future, he hopes to be able to work clinically with disadvantaged populations as well as to be able to do research to advance the field of neuroscience.