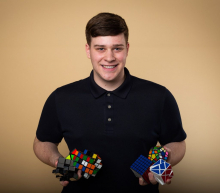 The President’s Medalist Award celebrates the top student in each undergraduate class. Each medalist is selected by a committee for their high GPA, rigor of their classes and number of Honors courses.

In high school, Jason was a national A.P. scholar and a national merit finalist. He also played alto sax in jazz band and percussion in concert band. He went on to earn the outstanding musician award for his percussion skills. Jason was directly admitted to the UW Chemistry major as an entering Freshman and dove into the rigor of Honors General Chemistry, ultimately sharing  the award given to the top students in the Honors General Chemistry series.  When Jason isn’t studying, he enjoys spending time with friends and playing computer games. He also enjoys Rubik’s-type puzzles because of the logic and algorithms involved in solving them.

We congratulate Jason on his excellent academic record!