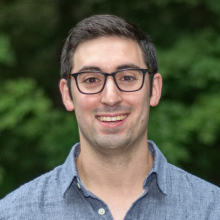 We are delighted to announce that Dr. Matthew Golder will join us as Assistant Professor of Chemistry.

Dr. Golder received his B.S. in chemistry from the University of Rochester in 2010. As an undergraduate student, he conducted research with Professor Patrick Holland on the mechanism of iron catalyzed nitrene transfer. He was also a DAAD-RISE Scholar with Professor Stefan Hecht at Humboldt University of Berlin, where he first became interested in organic materials. A native of Massachusetts, Dr. Golder began his graduate studies in 2010 at Boston University with Professor Ramesh Jasti, though following the group’s relocation, he received his Ph.D. from the University of Oregon in 2015. Dr. Golder’s doctoral research was focused on the total synthesis and characterization of a particular class of aromatic macrocycles known as cycloparaphenylenes; these highly strained molecules represent the smallest fragments of armchair carbon nanotubes. Dr. Golder returned to Massachusetts, where he is currently conducting postdoctoral work in the broad areas of macromolecular chemistry including precision polymer synthesis, diblock copolymer self-assembly, and drug delivery with Professor Jeremiah Johnson at the Massachusetts Institute of Technology.

Dr. Golder will launch his research program at the University of Washington in August 2019. His independent program will address the increased interplay between physical organic chemistry and material science that will undoubtedly give rise to the next generation of advanced macromolecules for applications in biomedicine and engineering. Rooted in structure and mechanism, his group’s research will address challenges in macromolecular synthesis across a variety of scales.

For more information about Dr. Golder and his research, please visit his faculty page and research group website.