A breakthrough chromophore for photonics applications 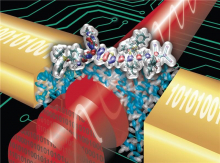 The cover of the Journal of Materials Chemistry C features the new organic electro-optical (OEO) chromophore BTP7 which was developed by researchers using a theory-guided design methodology pioneered by the Robinson and Dalton groups at the UW.

When used at a 10% concentration within an inert polymer such as PMMA (plexiglass), BTP7 matches the electro-optical activity performance of classic OEO material JRD1 at 100% concentration and delivers 12x the performance of JRD1 for a given mass of material. However, BTP7’s performance does not increase with added concentration. The high performance at low concentration makes the chromophore well-suited for blending with a variety of polymers or applications where a low refractive index is desired. The team has been utilizing discoveries from this project to develop chromophores with similar hyperpolarizabilities but even larger bulk performance.

NLM is a spinout company from the Department of Chemistry and has commercialized OEO materials from the Dalton and Robinson groups including JRD1 and HLD and has others in the pipeline. In addition to their academic and staff appointments at the UW, Johnson is the Chief Scientific Officer, Elder is the Director of Materials Development, Hammond is the Director of Process Development, and Robinson is the Senior Advisor at NLM. NLM has licensed a portfolio of patents and patent applications from UW CoMotion, and continues to be in active collaboration with the UW to develop and commercialize these technologies.