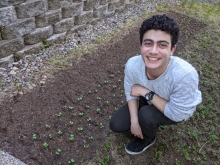 In the spring quarter, most 19-year-old undergraduate students find themselves signing up for fall courses, reveling in the completion of their second year. Instead, Kamil Saad is graduating from the University of Washington (UW) with a bachelor’s degree in biochemistry, reminiscing on his final year as an undergrad, and preparing for a new chapter in his career as an associate scientist.

Irked by essay-writing, Saad knew he would avoid the humanities and pursue the natural sciences. He found himself unintrigued by physics, so biology and chemistry remained. “There’s just things wiggling around inside of us, and then boom: life and consciousness,” said Saad, explaining the origin of his fascination with biochemistry.

However, biochemistry has served as both a beacon and a challenge for Saad. He has endured two autoimmune diseases, ulcerative colitis and ankylosing spondylitis, for most of his life. Ulcerative colitis causes inflammation and sores in the digestive tract, and ankylosing spondylitis is a type of arthritis that causes pain and stiffness in the spine. His condition is one reason among many that his interest in biochemistry blossomed into an ambition to develop pharmaceutical drugs to help others, and perhaps even himself. Grappling with his condition may have been an extra hurdle, but it certainly has not kept him from success.

Saad accelerated his education by participating in a program called “Running Start,” a dual enrollment program that allows high school students in the state of Washington to take courses at community colleges for both high school and college credit. After completing two years at Cascadia College as a high school student, he was able to complete his bachelor’s degree at the UW in only two years.

Following the advice of his peers, Saad enrolled in the honors biochemistry course sequence at the UW. The coursework would not be enough over his first year. Saad yearned for more hands-on experience in biochemistry to prepare him for industry, so he hastily sought out research opportunities over the summer of 2020.

“I think I emailed somewhere between 20 to 40 professors...Most were like, ‘you sound great! But we don’t have space because of Covid,’” said Saad. Nonetheless, his persistence ended in success, landing him an opportunity to work on a research project in the School of Nursing related to gastroenterology.

Under the guidance of Ernie Tolentino, M.S., manager for the Office for Nursing Research Laboratory Testing Services, Saad began a project focused on Irritable Bowel Disease. He engaged in a wide array of activities including running PCR (polymerase chain reaction) and manipulating data sets. Saad also studied an inflammatory protein called calprotectin while working on a project headed by Gastroenterology postdoctoral scholar Kendra Kamp and Dr. Scott Lee, UW associate professor of Medicine and Gastroenterology. They measured the protein’s concentrations in blood, saliva, and fecal samples, and observed how these concentrations changed based on factors such as bacteria exposure.

Throughout his past year of research, the mental and emotional weight of the COVID-19 pandemic remained. Saad noted a slow start to research in the fall, but fortunately, progress accelerated in the winter and carried its momentum into the spring. For him, consistent self-care was crucial to his continued success in the face of the pandemic.

“The pandemic really takes its toll on mental health,” said Saad, “...in terms of school, that was probably the most challenging thing.” In order to be successful, Saad emphasized the importance of asking for help. “At some point, even if you could do something on your own, why not use the help that’s out there?” Saad says he also focuses on the things that are important to him to help boost his mental health.

Daily walks, a new hobby of gardening, and human connections with friends and family are among the things that bring Saad the most happiness. “My mom wanted flowers for Mother’s Day, and I was like, ‘Hey, what if we grew them instead?’” His thoughtfulness is a testament to the importance he places on those relationships and the impact they have on his life.

Saad’s most recent victory came in the form of a job offer. Following his interest to develop pharmaceuticals, he now has a position as an associate scientist lined up at Just Biotherapeutics. There, Saad will develop cell lines that produce specific monoclonal antibodies. After working for a few years, he hopes to continue moving up in the pharmaceutical industry. If not, he’s considering graduate school to help propel his career.

With a garden full of flowers and veggies, an imminent graduation, and a new job on the horizon, it’s clear that if Saad puts his mind to it, his persistence will carry him to the finish line.

Gunnar Goetz is a graduate student in the research group of Prof. Sarah Keller where he studies the morphology of phase-separated membranes. Following his experience as a writer for his high school newspaper, Gunnar is pursuing freelance science writing as a possible career after finishing his Ph.D.