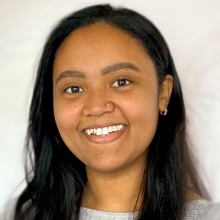 Tammi van Neel, a doctoral candidate in Assistant Professor Ashleigh Theberge’s group, was recently awarded a Howard Hughes Medical Institute Gilliam Fellowship. The 2021 class of Gilliam adviser-student pairs is the largest group of fellows selected in the Gilliam Program’s history as part of a program to advance diversity and inclusion in science. Tammi was selected for conducting outstanding research in her respective scientific field. Tammi develops analytical tools and methods to study how cells communicate with each other using beads that capture small, short-lived signaling molecules. As Tammi’s adviser, Prof. Theberge will participate in a year of mentor development activities through the Gilliam Program.

Tammi was born in South Africa and grew up in Aliso Viejo, California. She received a B.Sc. in Chemistry from Florida State University in 2017. While at FSU she participated in research focused on glucagon immunoassays using capillary electrophoresis with Dr. Michael Roper as an ACS Scholar. At the University of Washington, she focuses on developing bioanalytical technologies and methods to address challenges in medicine. She is also the recipient of a 2019 NIH Research Supplement and a 2021 Merck Research Award for Underrepresented Chemists of Color. Outside of lab, Tammi enjoys reading, gardening, traveling, and crafting.

Visit HHMI.org to learn more about the program and how it employs mentorship and funding to ensure that students from populations historically excluded and underrepresented in science are prepared to become scientific leaders.