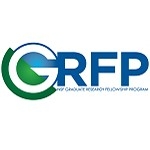 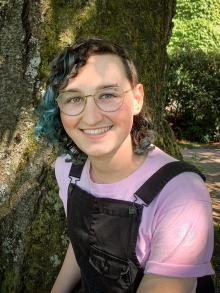 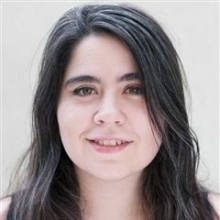 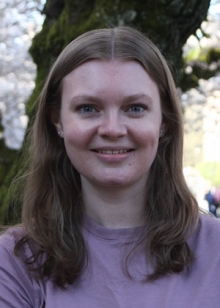 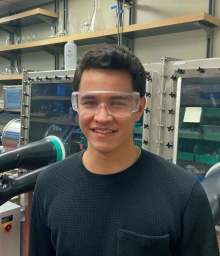 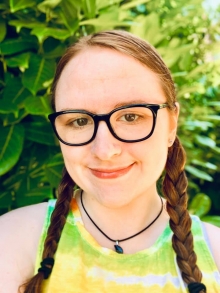 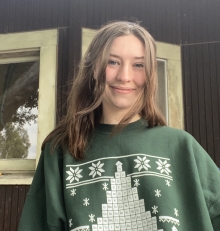 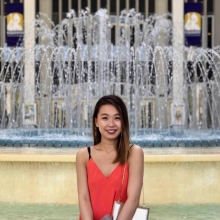 Congratulations to the students in the Department of Chemistry who were awarded 2022 National Science Foundation Graduate Research Fellowships, and to the five graduate students who received honorable mentions. The NSF Graduate Research Fellowship Program recognizes and supports outstanding graduate students in NSF-supported science, technology, engineering, and mathematics disciplines who are pursuing research-based master’s and doctoral degrees at accredited U.S. institutions.

Ashlyn Kamin is a second-year graduate student in the group of Assistant Professor Dianne Xiao. Ashe works on the design and synthesis of novel conjugated metal-organic materials. Ashe grew up in Northern California before attending Whitman College in Eastern Washington where they studied chemistry and music. Outside of lab, they can be found playing and listening to music, exploring the outdoors, or cooking with friends.

Cecily Rosenbaum is a first-year graduate student in the group of Assistant Professor Cody Schlenker. Her research focuses on the fabrication of heavy-atom free photon upconversion films for solar energy applications. The novel organic molecules which make up the key components of these films aim to increase the efficiency of commercial solar cells while remaining scalable and industry friendly. After moving from Sao Paulo, Brazil, Cecily spent most of her childhood in Philadelphia and graduated from Bard College last May. In her free time, Cecily likes to learn new hobbies, dance, and play board games with friends.

Addison Roush is a second-year graduate student in the group of Associate Professor Matt Bush. Read more about Addison on the Bush Lab site.

Damielle Hieber is a graduating senior majoring in biochemistry and minoring in chemistry. She has been researching in the bioanalytical chemistry lab of Assistant Professor Ashleigh Theberge since September 2021, focusing on microfluidics and biomedical applications. After graduation, Damielle will be attending the University of Wisconsin-Madison as a Ph.D. student in the food science program.

Madeline Currie is a second-year graduate student in the research group of Professor Champak Chatterjee. She is investigating the effects of histone post-translational modifications on chromatin structure and gene expression. Madeline grew up in Lake Zurich, Illinois and received a B.S. in biochemistry from Hofstra University. Outside of the lab, she enjoys reading and hiking with friends.

Sebastian Krajewski is a second-year graduate student in the research group of Assistant Professor Alexandra Velian. He is working on the synthesis of atomically precise nanoclusters with catalytically active transition metal edge sites. Sebastian grew up in Arlington, Massachusetts, and received a B.A. in chemistry from the University of Colorado Boulder. When he's not working in the glovebox, Sebastian enjoys gaming, reading philosophy, and petting his cat.

Kathleen Snook is a second-year graduate student in the research group of Assistant Professor Dianne Xiao. She previously studied at Boston University and worked in the research laboratory of Professor John Caradonna on the use of transition metal polyhydride clusters for small molecule activation. Now, Kathleen works on the controlled oxidative synthesis of 2D triphenylene-based metal-organic frameworks and recently attended the American Chemical Society’s Spring 2022 National Meeting to give a talk on her work. The materials she studies are particularly promising for energy storage applications, such as capacitors, and she hopes to continue working on clean energy materials in industry post-graduation. In her spare time, she enjoys playing with her cat, Sylvie, watching reality television, and reading comic books.

Eden Tzanetopoulos is a second-year graduate student in the research group of Professor Daniel Gamelin. She works on the synthetic exploration of transition metal-doped inorganic fluoride nanocrystals for lighting applications. Eden grew up in Los Angeles before attending the University of California, Berkeley for her undergraduate degree. In her free time she enjoys curating music for her radio show, baking, and hiking.

Madeline Wong is a second-year graduate student in the research group of Associate Professor Joshua Vaughan. She is studying hematopoietic stem cell differentiation through single molecule fluorescence in situ hybridization. Madeline grew up in Mamaroneck, New York and received a B.S in biochemistry from Lehman College, CUNY. In her spare time, she enjoys traveling or cooking.