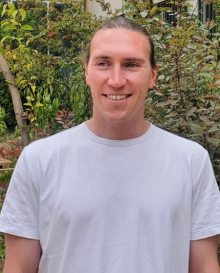 Congratulations to Dr. Jacob A. Busche ’21 who was recently awarded a Marie Skłodowska-Curie European Postdoctoral Fellowship by the European Commission! Jake is investigating the information processing potential of surface phonon polaritons, hybrid states of light and matter in which energy is passed resonantly between photons and the charged oscillating nuclei of polar crystals, with Professor Antonio I. Fernández-Domínguez and Dr. Johannes Feist at the Condensed Matter Physics Center (IFIMAC) of the Autonomous University of Madrid.

Polaritons may one day help overcome current bottlenecks in both classical (digital) and quantum computing. In both contexts, heat dramatically limits current device performances—in the former by reducing the reliability of transistors, forcing engineers to slow down processor speeds, and in the latter by destroying crucial coherence metrics of qubits, forcing engineers to build big, supercooled quantum computers with relatively few logical elements. By mixing light with the materials that transfer and manipulate information at the nanoscale, researchers may one day be able to decouple computers from the thermal processes that confine their potential.

Before moving to Spain, Jake was a student in Professor David Masiello’s research group and earned his Ph.D. in 2021 for his work in nanoscale spectroscopy and microscopy with the dissertation “Next- Generation Nanospectroscopy: Analytical and Numerical Models of New Developments in Electron Beam and Scanning Probe Experiments”. When he isn’t working, he can be found enjoying the Madrilenian cuisine and catching up on all the sunbathing that he missed in Seattle.