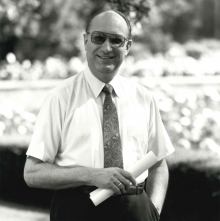 Heinz G. Floss, a world-renowned biosynthetic chemist and emeritus professor of chemistry at the University of Washington, passed away at his home in Bellevue, Washington, on December 19, 2022. He was a highly recognized and esteemed scientist, an eminent personality and an outstanding educator.

Floss’s work ingeniously illuminated how plants and microbes construct natural chemicals--many of which are important for human health. Eventually this work helped pave the way to the genetic engineering and production of complex chemicals for the betterment of humankind. His lab was renowned for employing the latest technology of the time in unravelling the metabolic pathways of natural product biosynthesis. This pioneering spirit was cultivated by Floss who trained nearly 150 Ph.D. and postdoc scientists, many of whom became university professors and leaders in industry carrying on his scientific legacy.

Heinz Floss was born on August 28, 1934 in Berlin, Germany. He studied chemistry at the Technical University of Berlin where he did his Diploma thesis under the guidance of Prof. Friedrich Weygand. There he used radioactive substrates to study the rearrangement of diazoketones with Helmut Simon with whom he would later author an influential book on isotope labeling in organic chemistry and biochemistry. When Weygand moved to the Technical University of Munich in 1958, Floss moved with him to obtain the doctoral degree. The thesis focused on the biosynthesis of ergot alkaloids in fungi and paved Floss's way into natural product biosynthesis.  This work was done in collaboration with Prof. Kurt Mothes and Dr. Detlef Gröger, in Halle, East Germany. Both the charismatic personality of the plant biochemist Mothes and the mentoring by Weygand were instrumental in sparking Heinz interest in the biosynthesis of natural products. A photo of Kurt Mothes in Floss’ university office in Seattle honored their close relation and long-lasting friendship.

After receiving his doctorate in 1961 and while doing his Habilitation (Munich, 1966), Floss, accompanied by his wife Inge, and three of their four children, spent some time (1964-65) at the University of California, Davis, where he was a guest in Prof. Eric E. Conn’s laboratory. The work on ergot had acquainted Floss with Prof. Varro E. (Tip) Tyler, one of the founding fathers of modern Pharmacognosy in the United States. Tyler was very impressed with both Floss’ work and his personality, and when he became Dean of Purdue University’s School of Pharmacy in 1966, he offered Floss a faculty position in the Department of Medicinal Chemistry.

At Purdue, Floss expanded his work to include stereochemical aspects and enzymatic mechanisms. He became fascinated by enzyme catalysis, and with his talent, creativity, and ability to think his way into complex biochemical problems, he quickly made a great impact in the field. One of his outstanding works, which is still magical to many, was the study of chiral methyl groups, inspired by the elegant work of Prof. Duilio Arigoni at ETH Zürich. He used chemical and biochemical tools to generate methyl groups stereoselectively isotopically labeled with three hydrogen isotopes and developed assays to understand the control of chirality in enzyme-catalyzed reactions.

Also at Purdue, he began working on the biosynthesis of antibiotics. Through this new direction of his work, Floss became acquainted with Sir David Hopwood, a pioneer of Streptomycete genetics at the John Innes Centre in Norwich, and with Prof. Satoshi Omura, a world-renowned antibiotics researcher and 2015 Nobel Laureate. Together, they demonstrated that genetic engineering and combinatorial biosynthesis of new hybrid antibiotics, that are not found in nature, was feasible.

Floss was clearly a pioneer in moving away from the traditional natural products chemistry of his generation towards interdisciplinary approaches, employing sophisti­cated isotope labelling studies and a variety of state-of-the-art biological methods.

In 1982, he moved to the Ohio State University to become chair of the Department of Chemistry, all while maintaining a vibrant and productive research group. There he collaborated with microbial geneticist Prof. William R. Strohl, familiarizing himself with molecular genetics along the way. Upon his move to the University of Washington in 1987, Floss began applying molecular genetic approaches in his own laboratory. Over the following 18 years at UW, his group used the tools of chemistry, enzymology, and molecular genetics to study the biosynthesis of a plethora of important natural products. These included rifamycin (in collaboration with C. R. Hutchinson), ansamitocin P3 (with Eckhard Leistner), taxol (with Rodney Croteau), acarbose (with Wolfgang Piepersberg), validamycin (with Zixin Deng), as well as granaticin, thiostrepton, and asukamycin.

Over the 40 years of his academic career, Floss advised 70 Ph.D. students, mentored 75 postdocs, and hosted 15 visiting professors. He is recognized as a true grandmaster who trained numerous accomplished scientists around the world and profoundly influenced the development of the field of natural product chemistry. He was admired by his students and colleagues for his drive and ability to create a lab full of self-motivated students and postdocs, encouraging their scientific curiosity and independence, and championing them even after they had left his lab. It was the interdisciplinary combination of techniques used in his lab that enabled so many of his students and postdocs to successfully pursue academic careers across fields as diverse as pharmacy, chemistry, biochemistry, microbiology, and molecular genetics. He was an exceptionally talented researcher, a wonderful mentor, and a valued community member. He organized numerous scientific conferences and served as President of the American Society of Pharmacognosy.

During his scientific career, Floss published almost 450 research articles. He received many honors and awards, including the Lederle Faculty Award (1967), the Mead Johnson Undergraduate Research Award (1968), the NIH Research Career and Development Award (1969–1974), the Lilly Distinguished Professorship (1977), the Volwiler Award (1979), the Humboldt Research Award (1980), the Newby-McCoy Award (1981), the ASP Research Achievement Award (1988), the Award in Microbial Chemistry of the Kitasato Institute and Kitasato University (1988), and the White Magnolia Commemoration Award and Medal, Shanghai (1995). He was awarded honorary doctoral degrees by Purdue University in 1986, the University of Bonn in 2001, and the University of Freiburg in 2014.

Floss was truly a man of many talents. His scientific achievements and his personal life as a husband, father, and grandfather are congruent with and underscored by a strong work ethic. His admiration of Asian culture and Native American art, as well as his love of travel, were shared by his beloved wife Inge. Just weeks before his death, they were finally able to return to Kyoto, Japan, one of his favorite places. That he became a chemist (rather than an electrical engineer) was almost pure chance, and for many of us that was a great fortune. His death on December 19, 2022, is a moment to reflect on his eminent personality, his distinguished career, and his great contributions to science.