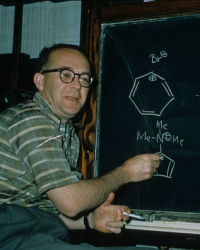 Professor Dauben was born in Ohio in 1915. He received his bachelor of arts and master of science degrees from Ohio State University and his Ph.D. from Harvard University. After working as a special research associate with the Office of Scientific Research and Development during World War II, Dr. Dauben came to the University of Washington as an Assistant Professor of Chemistry in 1945. He was promoted to Associate Professor in 1950 and promoted to Professor in 1960. Professor Dauben was internationally renowned for his research on nonbenzenoid aromatic compounds, carbocations, and reaction mechanisms.

Dr. Dauben actively participated in building the department to one of international repute and made important contributions in many areas of physical organic chemistry.  Dr. Dauben created "a new, three-quarter graduate sequence in advanced organic chemistry which constituted a thorough, modern coverage of molecular structure, properties, functional group transformations, and electronic reaction mechanisms," introduced a graduate course in physical organic chemistry, and co-revised the text and experiments for the undergraduate organic courses.

His career was cut short when he suffered a stroke and died at the age of 52.

The Hyp J. Dauben, Jr. Memorial Fund was established in 1968 with gifts from colleagues, family, and friends to honor the memory of Hyp Joseph Dauben, Jr., and to aid and stimulate the pursuit of excellence in research in the Department of Chemistry.