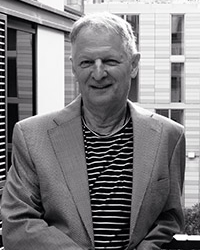 In the recent past, research in the Reinhardt group has been focused on issues relating to the dynamics of the newest state of matter, the gaseous Bose-Einstein condensate. These highly unusual macroscopic, but fully quantum, systems consist to millions to billions of Bosonic atoms, and more recently molecules, which behave as a single and fully coherent quantum object. They are of interest in their own right, and also as the precursors of quantum technologies of the future, including quantum encryption and quantum information processing.

Our group’s work has focused on the non-linear dynamical properties of these systems: 1) as they are divided into pieces (or fragmented, an analog of the dissociation of a molecule) full treatments of both many-body correlations, and the very strong “mean field" or "SCF” potentials must both be taken into account, new methods developed in the group do this efficiently and effectively; 2) as these same SCF effects give rise to non-linear phenomena such as “solitons” which are a special type of wave motion, depending on the full phase coherence of the BEC, which does not dissipate: current work involves understanding the coherence of both bright and dark solitons, and mechanisms for their self-destruction via many-body de-coherence; and 3) through using both the non-linear and phase coherent properties of the BEC, we have developed methods to create highly entangled states of the condensate, otherwise known as "Schrödinger's cat states," the creation of which is at the heart of quantum information processing, and well as testing quantum mechanics itself at a fundamental level. Finally, one of the many functions of theory and simulation is to confront experiment: in several recent cases (see publication list) we have simple and convincing explanations of recent experiment which turn out to be rather at odds with the original interpretations of the experimentalists.