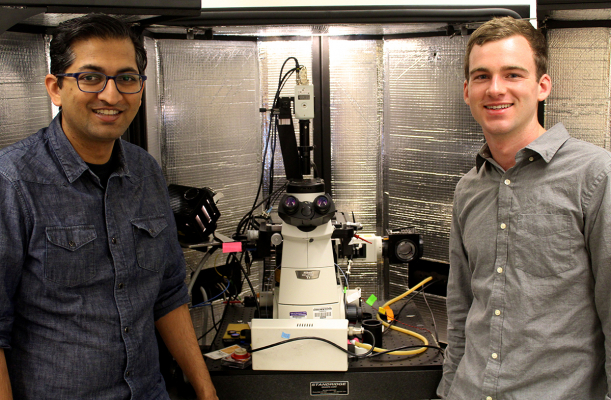 Recent work by Professor David Ginger and colleagues was published online on June 19 in Nature Materials. The research was also highlighted in a News & Views article.

The Ginger group, in collaboration with Professor Christine Luscombe (Materials Science & Engineering) and the Clean Energy Institute, has discovered the basic design principles for constructing polymers that can transport both electrons and ions. This is a critical step toward making polymer-based devices at the interface of biology and electronics, such as improved biosensors and bioelectronics implants.

“Most of our technology relies on electronic currents, but biology transduces signals with ions, which are charged atoms or molecules,” said David Ginger, Alvin L. and Verla R. Kwiram Endowed Professor of Chemistry and chief scientist at the UW’s Clean Energy Institute. “If you want to interface electronics and biology, you need a material that effectively communicates across those two realms.”

UW researchers directly measured a thin film made of a single type of conjugated polymer—a conducting plastic—as it interacted with ions and electrons. They show how variations in the polymer layout yielded rigid and non-rigid regions of the film, and that these regions could accommodate electrons or ions—but not both equally. The softer, non-rigid areas were poor electron conductors but could subtly swell to take in ions, while the opposite was true for rigid regions.

Their results demonstrate how critical the polymer synthesis and layout process is to the film’s electronic and ionic conductance properties. Their findings may even point the way forward in creating polymer devices that can balance the demands of electronic transport and ion transport.

To learn more about Professor Ginger and his research, please visit his faculty page and research group website.

To learn more about Professor Luscombe and her research, please visit her faculty page and research group website.