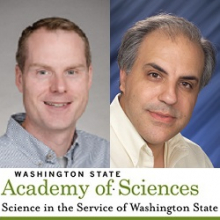 Professor David Ginger and Affiliate Professor Sotiris Xantheas are among the 29 new members of the Washington State Academy of Sciences, in recognition of their “outstanding record of scientific and technical achievement and willingness to work on behalf of the Academy to bring the best available science to bear on issues within the state of Washington.” The Washington State Academy of Sciences provides expert scientific and engineering analysis to inform public policy-making, and works to increase the role and visibility of science in the State of Washington. The new members, elected based on their achievements, will be inducted during the academy’s eleventh annual meeting at the Seattle Museum of Flight on September 13, 2018.

As the WSAS noted in their press release, of the 29 new members, 16 were elected directly by the WSAS membership, while the other 13 reflect “a re-doubling of WSAS’s efforts to invite members of the National Academies of Sciences, Engineering, and Medicine living in Washington State to serve as members of our Academy.” Professors Ginger and Xantheas were among those directly elected by the WSAS membership, which has a total of 286 members including those newly elected.

For more information about Prof. Ginger and his research, visit his faculty page or his research group website.

For more information about Dr. Xantheas and his research, visit his faculty page or his PNNL staff page.