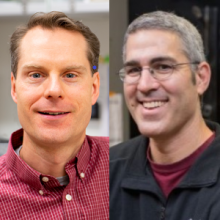 The U.S. Department of Energy Solar Energy Technologies Office selected two University of Washington professors in the Department of Chemistry and the Clean Energy Institute to receive nearly $1.5 million in funding for two separate endeavors in solar photovoltaic research. The projects are led by Daniel Gamelin, director of the UW-based Molecular Engineering Materials Center, and David Ginger, chief scientist at the CEI and co-director of the Northwest Institute for Materials Physics, Chemistry, and Technology, a partnership between the UW and the Pacific Northwest National Laboratory.

Ginger’s project, which will receive $1.25 million, focuses on developing new methods to alleviate the impact of defects in perovskite solar cells. Perovskites are printable crystalline compounds that can harvest sunlight and convert it to electricity at efficiencies comparable to silicon-based semiconductors used in today’s solar cells. Perovskite solar cells could be printed on roll-to-roll printers like newspapers, reducing manufacturing costs. They are a rapidly growing branch of solar cell research and development, and Washington Clean Energy Testbeds, operated by the CEI, includes facilities for developing and testing these technologies, including a 30-foot-long multistage roll-to-roll printer.

Atomic-scale defects at perovskite surfaces can reduce their performance. Previous research by Ginger’s group has shown that surface “passivation” — treating perovskites with different chemical compounds — can “heal” these defects and improve the efficiency of perovskite solar cells. But when these perovskites are assembled into solar cells, the current-collecting electrodes can create new defects, sapping efficiency. With this new funding, Ginger and his collaborators, Seth Marder and Carlos Silva at Georgia Tech, will develop new chemical passivation strategies, and new charge-collecting materials, that allow perovskites to reach their full potential while still remaining compatible with low-cost manufacturing.

The funds from the Department of Energy Solar Energy Technologies Office are part of $28 million in awards for 25 projects in photovoltaics and related fields to boost efficiency and reduce costs in solar energy, according to a March 22 announcement from the office. The first set of selections from this program, announced late last year, included more than $2.3 million awarded to UW projects.