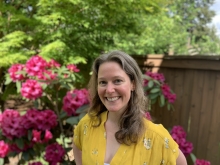 The nanoscale is an exciting frontier in science. Brandi Cossairt, synthetic chemist and UW professor of chemistry, is helping lead the charge to understand how nanomaterials form, grow, and behave. Cossairt’s trailblazing discoveries in this field were recognized today by the Blavatnik Family Foundation and the New York Academy of Sciences as a Finalist for the Blavatnik National Awards for Young Scientists.

The Blavatnik National Awards for Young Scientists recognize the United States' most promising faculty-rank researchers in Life Sciences, Physical Sciences & Engineering, and Chemistry. Cossairt was among 298 nominations of early-career scientists and engineers aged 42 years or younger. Three winners will be announced on July 20, each receiving $250,000 as a Blavatnik National Awards Laureate.

Cossairt has harnessed surface chemistry to functionalize, protect, and enhance nanoparticles, and created a set of predictive principles that could accelerate the development of nanotechnology based on simple and scalable solution-processed materials. The impact of Cossairt’s work can already be seen in toxic elements being removed from television displays and LEDs, and in improved nanoparticle catalysis for the production of fuels and fertilizers. Looking further into the future, Cossairt is designing generalizable methods to create large networks of linked nanoparticles and hybrid nanoparticle materials that could exhibit powerful new functionality.