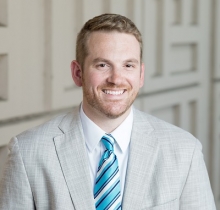 We are delighted to announce that Dr. Nicholas Riley will join us as Assistant Professor of Chemistry in 2023!

Dr. Riley received his B.S. in chemistry and psychology from the University of South Carolina in 2012, with Honors from the South Carolina Honors College. His undergraduate research in forensic analytical chemistry with Prof. Stephen Morgan first introduced him to mass spectrometers. He quickly became fascinated with these instruments, which led him to his Ph.D. work in mass spectrometry (MS) instrumentation and proteomics with Prof. Joshua Coon at the University of Wisconsin–Madison. In the Coon group, he developed MS technology for gas-phase ion-ion reactions, with an emphasis on a tandem MS method called electron transfer dissociation (ETD) that he applied in analyses of peptides, proteins, and post-translational modifications. Nick is currently a K99 Postdoctoral Fellow with recently awarded Chemistry Nobel Laureate Prof. Carolyn Bertozzi at Stanford University. His postdoctoral work has centered around mucin-domain glycoproteins and the secretome, two challenging areas within glycoscience in need of new tools.

Dr. Riley will launch his research program at the University of Washington in the second half of 2023. His independent program will leverage creative technology development to study fundamental roles of glycosylation in cell surface biology, with a focus on glycocode regulation and dysregulation in cancer progression and metastasis. His group will integrate MS-based multi-omics, chemical/molecular biology, and bioinformatics in a systems-level approach to glycobiology to further our understanding of human health and disease and advance therapeutic glycoscience.