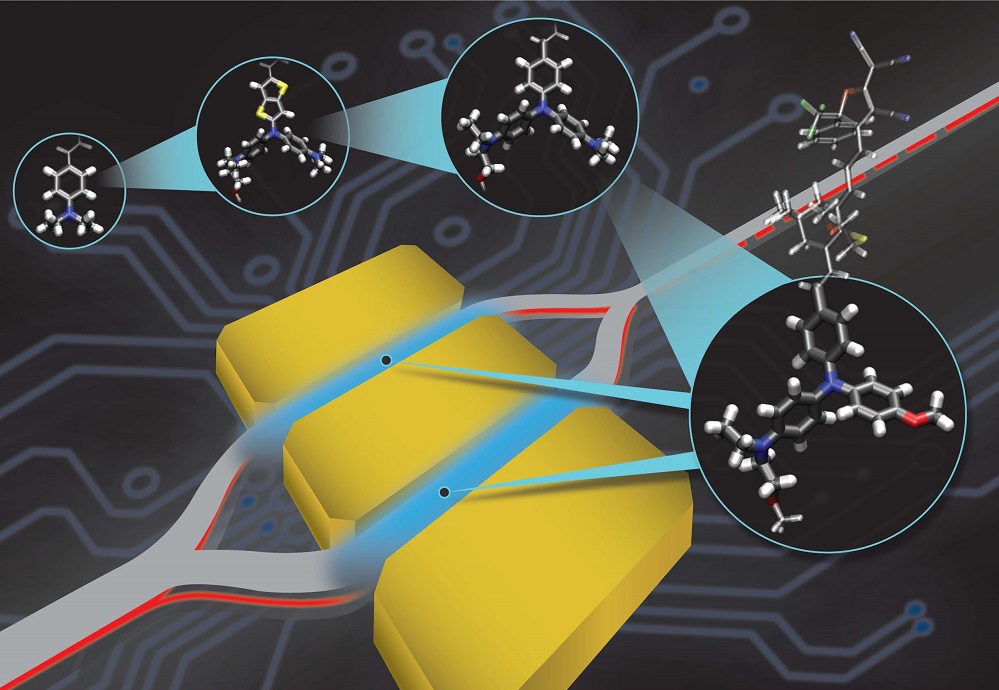 Electro-optic (EO) modulators are a crucial component in information technology, converting electrical signals into optical signals; for example, transmitting data on a fiber optic network. They form a “bridge” between electronics—efficient for digital computing—and photonics, which excels at data transfer and sensing. EO modulators are a hugely important billion-dollar market currently dominated by the inorganic material lithium niobate. Over the past decade, electro-optic conversion has been increasingly moving from being performed by separate components to being integrated on to more complex photonic chips, which has been extremely challenging for lithium niobate. Better EO materials are needed, and this team just may have found the solution in a new generation of organic EO materials.

A long-term goal within the UW Department of Chemistry, dating back to the National Science Foundation-funded Science and Technology Center on Materials and Devices for Information Technology Research (STC-MDITR) led by Prof. Larry Dalton, has been enabling efficient chip-scale integration of electronics and photonics, with high-performance integrated electro-optic modulators representing a crucial need for achieving this goal. Six years ago, advances in hybrid electro-optic modulators from the Dalton group and collaborators, combining a high-performance OEO material with nanoscale features on silicon photonic chips or plasmonic chips, was highlighted in the department’s 2016 summer issue of the ChemLetter as “The Next Big Thing?” (page 4).

However, despite prior record-breaking achievements, a need for further reduction in an EO modulator property called the voltage-length product (VπL) was identified. VπL is the device length required to shift the phase of light passing through the device by half a wavelength in response to a 1-volt signal, enabling digital switching from destructive interference of the waves. Plasmonic-organic hybrid (POH) technology in particular has been able to exhibit very low VπL values (on the order of 40-100 volt-microns), orders of magnitude smaller than conventional electro-optic modulators based on lithium niobate (~2-10 V-cm) or silicon photonics (~5 V-mm). Such low VπL values enable for the first time exceptional bandwidths (500+ GHz), remarkable energy efficiency (< 100 aJ/bit), and footprints small enough to be integrated on a chip alongside the microscale electronics. The impressive performance realized in POH devices has even led to commercial devices marketed by Polariton Technologies, a spin-off company from ETH-Zürich, utilizing UW-developed, NLM-commercialized materials.

Despite their many potential advantages, POH modulators have one Achilles’ heel: the same characteristics that tightly focus light and amplify interactions within them can cause them to absorb too much of the light that is passing through them. This light absorption is called optical loss. To take advantage of favorable properties of POH modulators, one needs materials and devices that will achieve a very low VπL over a very short interaction length to keep optical loss within acceptable limits.

Robinson and Dalton group researchers and their collaborators in the Institute for Electromagnetic Fields at ETH-Zürich and Polariton Technologies have used two approaches for improving VπL: reducing the width of the plasmonic waveguides to more tightly confine the optical and RF modes within them, and improving the electro-optic coefficient (r33) of the OEO materials, to which VπL is inversely proportional. Early gains came from the former approach but were limited by the difficulty of patterning smaller and smaller features and by less effective ordering of the OEO materials.

The present work addresses both issues. In early 2017, Research Scientists Dr. Lewis Johnson ‘12 and Dr. Delwin Elder, working with Prof. Bruce Robinson, began an extensive effort to use theory-guided design to optimize the electron donating moiety for a new generation of OEO chromophores, targeting a previously vexing component of chromophore design. Later joined by Postdoctoral Fellow Dr. Huajun Xu, who led much of the synthesis and electro-optic characterization of the newly designed materials, the group worked through a computation/synthesis/spectroscopy feedback loop using methods the group had been developing over the last decade, working with collaborators in Prof. Koen Clays’ group at the University of Leuven to obtain accurate measurements of the molecular hyperpolarizability of the new OEO chromophores and refine designs. Research Scientist Dr. Scott Hammond ‘07 assisted with development of techniques for effectively and reliably processing these materials.

The process was done under the constraint that the new materials had to have not only larger hyperpolarizability—to which electro-optic activity is proportional—but also not have excessive dipole moments, not be excessively red-shifted, and be synthetically accessible and processible. The first materials developed from this project, the “BTP” family of chromophores, had record hyperpolarizabilities but were difficult to process without diluting to a low concentration in an inert polymer host, which limited EO activity. However, further optimizations based on the same strategy, led to a more processible material called BAY1 that set a new EO record of over 1000 pm/V, two to three times better than the best prior OEO materials, and over thirty times higher than lithium niobate. The work was recently published in Advanced Materials. The EO performance milestone of 1000 pm/V had been a long-term goal, exceeding the performance of thin-film barium titanate, the highest-performing inorganic EO material in the near-infrared wavelengths used for communications applications.

BAY1 was still excessively lossy for current POH devices. But with an additional round of refinement, the new OEO material BAH13 was developed, which enabled retaining an extraordinary r33 > 1000 pm/V while reducing loss by a factor of 20. As measured by collaborators at ETH and Polariton, the BAH13 material described in the Materials Horizons paper enabled reducing VπL at constant device width by a factor of 1.8 while keeping loss per unit length to within 10% of prior materials, a substantial net gain in performance. The work also characterized the ordering distribution of materials within POH waveguides to help provide insights for design and processing improvements that would enable more efficient devices with smaller waveguide dimensions.

Work on the project at the UW was funded by the Air Force Office of Scientific Research (AFOSR), the National Science Foundation (NSF), and the University of Washington. Further work on BAH13 derivatives is ongoing via an NSF-funded STTR project involving spinout company NLM Photonics (formerly Nonlinear Materials Corporation), of which Dr. Johnson is Chief Scientific Officer, Dr. Elder is Director of Materials Development, Dr. Hammond is Director of Process Development, and Prof. Robinson is a Senior Advisor. NLM has licensed the technology for commercial use via UW CoMotion. A recent Air Force DURIP award to the Dalton group has also enabled build-out of new equipment for characterizing photonic devices, including POH modulators, within the Department of Chemistry, enhancing capabilities to optimize materials and processes for in-device use. 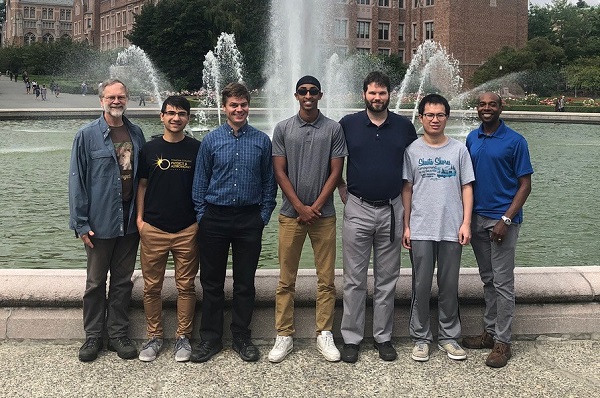 Editor’s Note: I would like to thank Lewis Johnson for writing this story as well as the other researchers who contributed by editing and proofreading to share these research updates. -dk