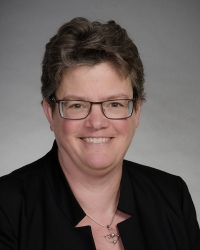 Professor McCoy received her B.S. in Chemistry at Haverford College in 1987, and returned to Connecticut to teach chemistry at Hotchkiss before pursuing a PhD with Prof. Edwin L. Sibert at the University of Wisconsin.  Dr. McCoy’s PhD work focused on using high orders of vibrational perturbation theory to study vibrationally excited states of a variety of small molecules, including water.  After graduating from the University of Wisconsin in 1992, Anne took a post doctoral position with Prof. R. Benny Gerber, dividing her time between the Hebrew University in Jerusalem and the University of California, Irvine.

Research in the McCoy group focuses on two interrelated areas of investigation. The first involves the development of theoretical and computational approaches that allow us to investigate molecules and complexes that undergo large amplitude vibrational motions even at low-levels of excitation. These are processes that are important in a variety of contexts, including systems of interest in astrochemistry, atmospheric chemistry, and in combustion processes. They also allow us probe more fundamental phenomena, such as hydrogen bonding or long-range charge transfer. These represent systems for which standard tools are insufficient, making them particularly interesting from a theoretical perspective. In choosing problems to study, we focus on systems that have been studied or are currently being studied by our experimental collaborators, or are potential targets for future experimental investigation.

She began her independent research program at Ohio State in 1994, and moved to the University of Washington in 2015.   Her research focuses on two interrelated areas of investigation.   She is a Fellow of the American Physical Society (2007), the American Chemical Society (2009) and the American Association for the Advancement of Science (2012). From 2005-2011 she was a Senior Editor for the Journal of Physical Chemistry, and has served as the Deputy Editor of the Journal of Physical Chemistry-A since 2011.  In addition, was a member of the ACS Committee on Professional Training from 2008 to 2018, and served as chair the committee from 2012-2014, and has been active in the PHYS division of the ACS, serving as Secretary/Treasurer from 2006-2011 and as an officer from 2016-2021. Her research has been recognized through a CAREER Award from the NSF; Camille Dreyfus Teacher/Scholar Award and Crano Lectureship from the Akron Section of the ACS.   While at Ohio State she received both the Distinguished Scholar Award and Harlan Hatcher Award Arts and Sciences Distinguished Faculty Award in 2013.